Taking a STAB at Dracula…in Kentucky!

What if vampires were real? What if they didn’t have fangs and pale skin and weren’t afraid of sunlight and religious symbols because…they look just like us? And what if, when they bite you, they don’t just drink your blood; they infect you with…toxic masculinity?! This is the world of Kate Hamill’s adaptation Dracula: a feminist revenge fantasy, a world that shifts between horror and comedy and challenges us to exorcise the monsters inside us all. It’s a world I’m VERY pleased to inhabit here at Actors Theatre of Louisville. Hello from Kentucky! 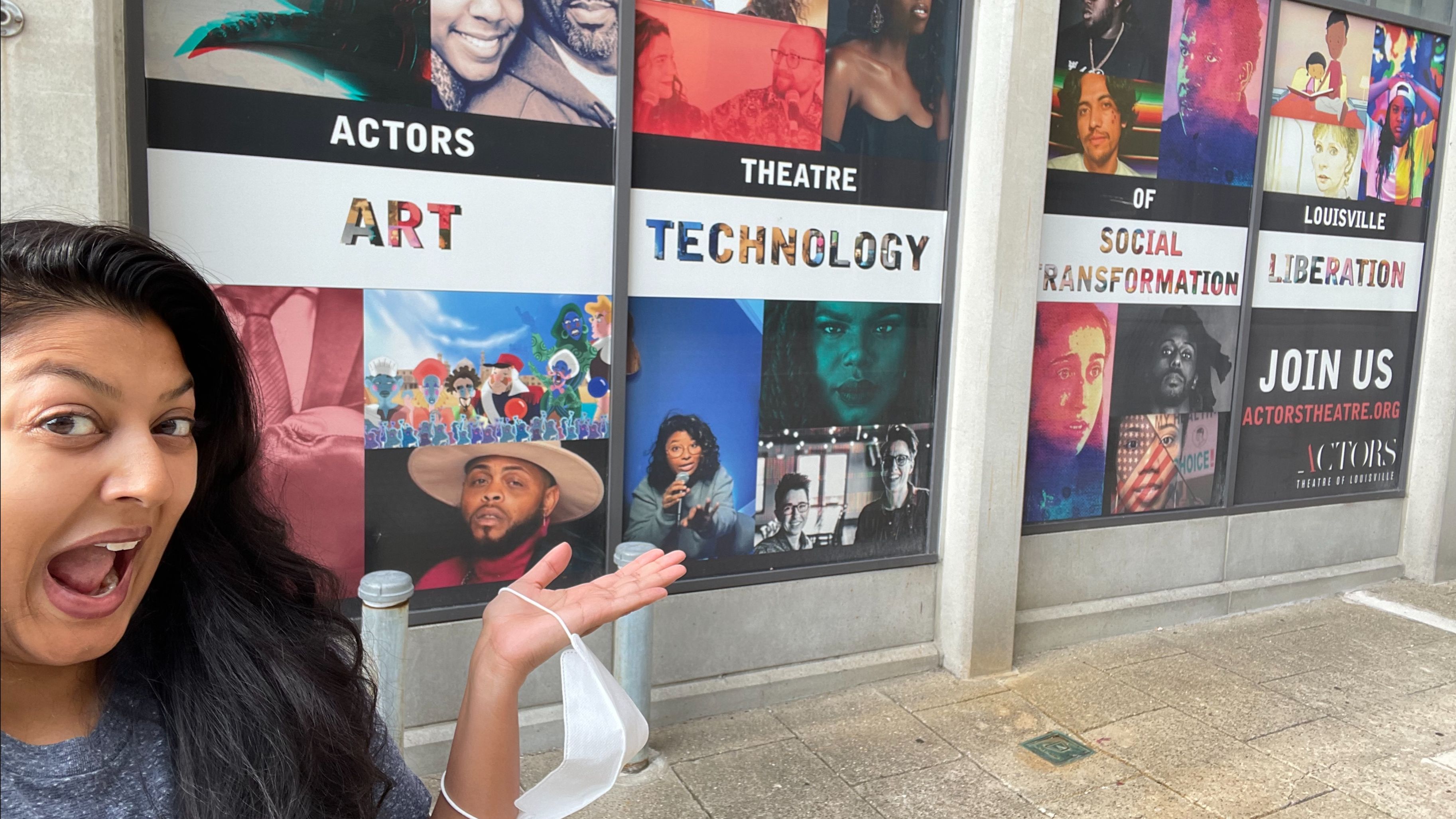 I’ve been here almost 2 weeks (though some of that was spent in isolation because of course, I made it through 4 months in Florida but on day 4 in Kentucky I tested positive for COVID. Oy!), and I keep getting more and more excited about this play. I know, I know, I say that about all the plays I work on, but that doesn’t mean it’s not true! I think this version of Dracula is bold and juicy and VERY timely. It puts a classic tale as old as time up to a new mirror, which hopefully will reveal perspectives we’d never thought about before, at least, not with this particular story.

Plus, this show will mark my first time ever working in the round! Writing down my blocking has been a whole new adventure because there is no static “upstage” and “downstage,” let alone “left” and “right.” The audience is ALL AROUND US. So we’re using the image of a clock face, assigning an hour of the clock to each area we can enter and exit, and using that same clock to indicate which way we move within the space. It was incredibly confusing at first – the learning curve is STEEP – and I keep having to re-orient myself towards 12 o’clock to remind myself where I am in space. Another fun challenge? I play Mina Harker, who is about 6 months pregnant for much of the play! It’s been really interesting to dig into how that affects her physicality and psychology, though I readily admit that I’m grateful this is all make believe – Mina goes through a LOT.

I had another realization early on in our process: this is my first time doing a straight period piece. It’s a rather recent innovation to have people of all ethnicities occupy the background AND foreground in mainstream period spaces on screen (think Bridgerton), but in theatre it’s been more common practice. It’s just that my forte (and interest) isn’t really classic work, which means I rarely audition for plays that require a British RP accent and which dress me in fabulous 19th century garb. It’s quite delightful to examine why, historically, my body *could* exist in middle class 1897 London, and why, in our version of Dracula, it only adds to the story to have Mina be played by a woman of South Asian descent. And you know what? I’m also having a grand ol’ time channeling Razia Iqbal’s accent – I knew my years of faithfully listening to BBC News Hour would pay off!

If you’re in or near Louisville, please join us:

Keep an eye on Facebook and Twitter, where I’ll be sharing behind-the-scenes (and backstage) pictures, videos, and musings. And if you run into a vampire, just remember, “stick it with the pointy end!”

Did you miss AAPAC‘s Tony Honors acceptance speech? Watch it now! Alas, it didn’t air during the Tony broadcast on June 12 (they played it in the theatre during a commercial break), but we’re still very proud:

And check out the photos below from the glam Tony Honors Cocktail party that we were invited to attend! Some photos are by genius photographer Lia Chang. My hair and makeup is courtesy of my brilliant artist friend Jessica Padilla. 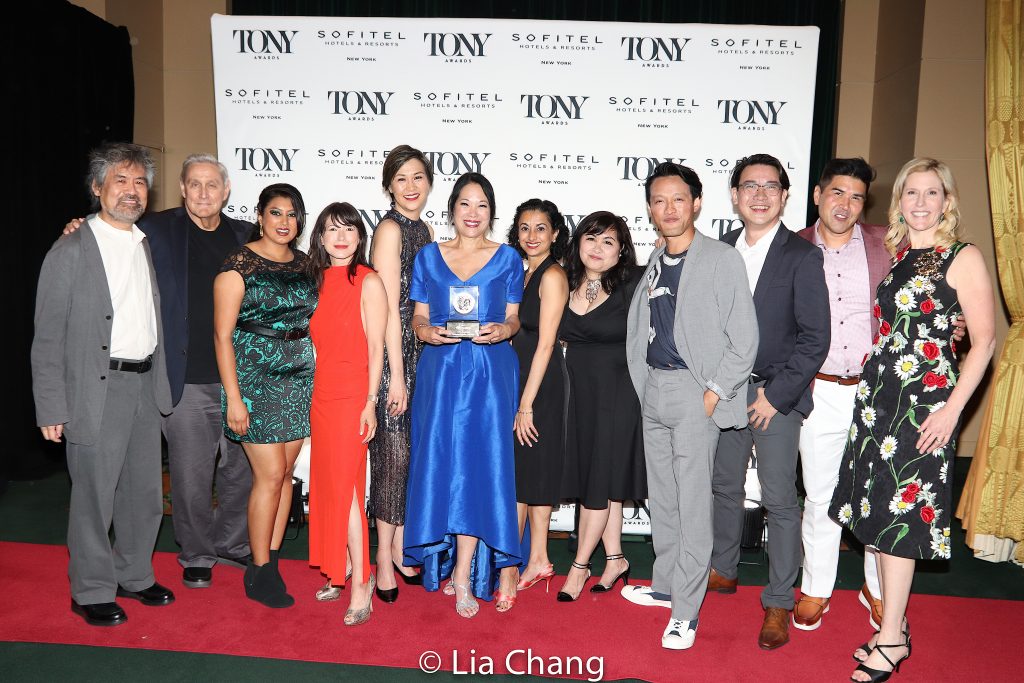 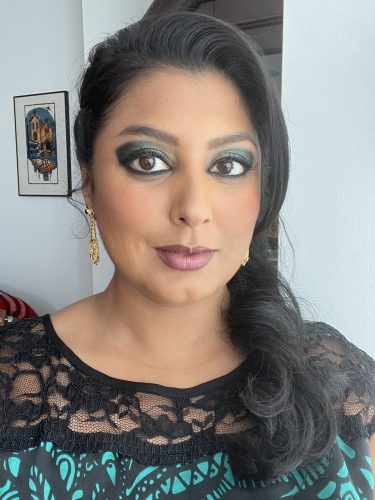 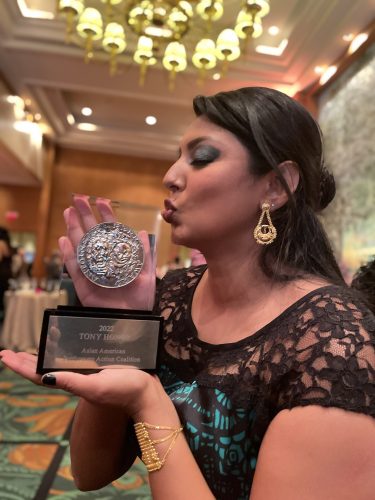