“The all-female cast nimbly leaps through genders and periods…Lipica Shah brings the same delicious sense of irony to her roles as a cricket player and a servant, both characters who know better than to speak truth to power.”
~San Jose Mercury News

“I’m not familiar with the work of NY-based Lipica Shah…[but her roles] were standouts.”
~The Thinking Man’s Idiot Blog

“The acting in this production clearly demonstrates that these actors are absolutely superlative in their interpretation and presentation of the show.”
~Martinez-Gazette News

“The marvelous cast pulls out all the dramatic and comedic stops to keep driving the play to its end.”
~Theater Dogs Blog

“Lipica Shah plays the complicated and dynamic Princess Noorah, giving vital humanity and consideration to the character whose tale ends with the most moral obscurity.”
~The Daily Californian

“Watch Shah’s Noorah as she finally gets a taste of the power she’s long craved, that she’s always known she could wield more effectively and efficiently than her inept father ever has. She breathes in as if to fuel herself on the changing atmosphere, as if to feel it expand her lungs and course through her veins. It’s as heady as a drug, but she can handle it, mastering it and herself.”
~San Francisco Chronicle

“Lipica Shah gets a juicy role (and knockout costumes) as a brutally pragmatic princess securing power for herself, and it’s a penetrating performance”
~EDGE Media Network

“Noorah (Lipica Shah)…seems like the quintessential evil princess, but eventually proves herself to be both a soldier and a policy wonk.”
~San Jose Mercury News

“As Noorah and Salima, Shah and Agbabiaka, respectively, pour boiling acid on their line readings. They scheme and pose and wave their arms about in the air, sisters in arms with Disney divas like Maleficent and Ursula.”
~SF Weekly

“The trio of actors…performs superbly as an ensemble, convincing the audience that they are the characters they portray…Lipica Shah as Geetee is equally as wonderful. Seesawing from one emotion to another…in a convincing performance that makes her fate all the more heartbreaking.”
~NJ Arts Maven

“Lipica Shah’s Getee rises to the challenge of portraying a young woman navigating the demands of both modern society and an ancient religious culture to reconcile her Afghan heritage and her American upbringing…It is a privilege to watch fine actors at work in such a well written and well directed theatre piece.”
~Out In Jersey Magazine

“Shah is Scheherazade–we see her as a young and passionate academic, out to change the world of the young women she is teaching. We see her as a young woman, who finds love in very unexpected places, and we see her as the woman she will become, as a revelation that rocks her to her core changes her world forever. This ensemble moves seamlessly from English through Dari with such facility and they give us an entire world in the microclimate of under two hours.”
~Q on Stage

“Lipica Shah as Lovi, the fiancé, gives us an animated, youthful, blushing bride-to-be and then an emboldened woman standing her ground. Together, these 9 actors open your heart and climb inside.”
~StageBiz Blog

“The non-members of the Batra family are equally colorful. Lipica Shah as Lovi is a bit of dark horse until she speaks her mind to Iggy in the play’s final scene.”
~TheaterScene Blog

“Sassy…The women in the cast give this ale depth and personal flavor.”
~Front Mezz Junkies Blog

“We marvel at [Newhard and Shah’s] ability to create so many varied copies of [themselves], who embody such wildly different languages, postures, and manners of speaking. It’s a testament to Newhard and Shah that they are able to turn between characters on a dime.”
~New York Theatre Review

“Performances by Mariana Newhard and Lipica Shah prove formidable as they collectively explore the show’s landscape in nine different languages and characters, all with distinguishing characteristics…these New York theatre veterans have no shortage of chops, and it shows in their ability to captivate even in moments that are sometimes confusing for audience members.”
~The Theatre Times

“Mariana Newhard (one of the authors) and Lipica Shah play the twin sisters (clones?) in a manner that actually suggests they might be the same person. They achieve an intimacy that is quite rare, in both their acting and their singing.”
~Hi!Drama blog

“The actresses and writers used the technology to raise their game and show different nationalities and personalities worldwide at ambitious scale.”
~Jiveflash.com blog

“A sense of entitlement hangs heavy around Priya. Actress Lipica Shah beautifully creates a child-woman who knows she’s a disappointment to her father and, more painfully, to herself.”
~Rochester Democrat and Chronicle

“The trio of actors have clearly developed a tightly wound chemistry. While Djourabchi and Shah bristled with icy hostility, Lowe’s earnest congeniality warmed the frigid atmosphere. The balance was near-perfect, and a tenor of uncertainty kept the story’s resolution in doubt at all times.”
~Rochester City Newspaper

“Lipica Shah delivers a chameleon-like performance, playing Leela’s bad-girl cousin, her duty-weary mother, a very self-assured 9-year-old (who knew it was possible to suck on a juice box with such an air of superiority?) and others.”
~Twin Cities Pioneer Press

“…it’s not even my fave performance in Orange. That “honor” (if you wanna call it that) goes to the beauteous Lipica Shah, who effectively energizes every scene. It’s hard to choose, but I think I liked her denizen of the all-night grocery the best. […she keeps] Orange moving […] It’s a breathless tour de force.”
~How Was The Show? Blog

“Shah and Ahmed have the most fun as they get to play a range of characters. For Shah, these include Leela’s mother and swaggering, impatient cousin, [using] costumes, gestures and cadence to draw their distinct characters, [doing] so efficiently.”
~Minneapolis Star Tribune

“The versatile Lipica Shah has appeared at Mixed Blood before. She [plays] all of the [female] characters in Leela’s world, […] and manage[s] to make each character distinct and interesting.”
~Cherry and Spoon Blog

The Who and The What:

“It’s a story that requires quick and strong character development, and director Emily N. Wells has a cast equal to it…Lipica Shah handles the role of “yes” daughter Mahwish with fingers crossed and heart in constant angst as she marries a man whom she admits only brings anger to her mind.”
~Naples Daily News

“The cast put on astoundingly singularly intense performances, particularly Lipica Shah in the role of the deceased’s sister. Her portrayal of a grieving young woman trying and failing to stay in control showed subtlety and wonderful emotional restraint from beginning to end.”
~Quick Theatre

“Lipica Shah delivers a genuine ferocity. You do not want to get on the bad side of Shah’s Jessica as she will tear you down. Yet Shah finds humility during Jessica’s crumbling moments of mourning. ”
~Theater in the Now

“The cast is excellent across the board, creating a deep and heartfelt intimacy. Shah is immediately likably sarcastic, and later bitingly cruel. Her heartfelt speech about losing her younger brother is evocative and powerful.”
~Theatre is Easy

“Some songs are stand-outs such as…’What Move to Make’ by the energetic literary agent who guides Carson’s career, Marie Rodell (Lipica Shah, who steals every scene she is in).”
~LideaMagazine.com

“Reasons To Go…The hilarious West Indian car service scenes featuring Lipica Shah and Indika Senanayake. The chemistry between those two ladies is infectious to watch. I think they deserve their own play (or film).”
~ArtsInColor.com Blog

“Shah’s Kalki gets all the naughty fun to play with in her character, and comes off as a frightening force of nature not to be messed with.”
~Twin Cities Daily Planet

“The play turns on a terrific performance from Lipica Shah as Kalki. Showing up in school in a spangled skirt, calf-high Doc Martens, and a torn jean jacket adorned with patches and badges, Shah embodies the character’s wild fury.”
~Minneapolis City Pages

“She’s a kind of one-woman catalyst for an apocalypse, and Lipica Shah brings a fiery, freewheeling energy to her characterization.”
~Saint Paul Pioneer Press

“Lipica Shah’s Kalki portrayal electrifies as a figure who dares the girls to push beyond society’s accepted limits regarding sex and revenge.”
~Lavender Magazine

“…the instant Lipica Shah’s Kalki strutted onstage in her simultaneously revealing and concealing outfit of wig, makeup, ripped clothes, and midriff-baring top she effortlessly oozed charisma and danger. She was perfect. Her bizarre obsession with rain and mud, her terrifying control over the other high school girls, and her artful manipulations of the other characters drove the show…”
~Minnesota Playlist

“…talk of turtles and illusions to Krishna are the highlights, along with Lipica Shah’s sexy, charismatically complex interpretation of the title character. …Ms Shah hits the various notes Kapil has laid out for her without any sense of strain—rushing up and down the gamut of human behavior like an opera diva practicing her scales.  It’s a bravura performance, all the more so for giving us no sense of the actor underneath—there’s only Kalki.”
~How Was The Show? Blog


“Kalki’s violent streak was the polar opposite of Shiv’s patient, slow-burning revenge plot, but Shah makes them both look easy.  So easy, I thought it was two different actresses.”
~Twin Cities Daily Planet

“With only 15 minutes between shows Sunday, Lipica Shah made an amazing transformation from wild girl Kalki to the gentle, affectionate Shivratri.”
~Saint Paul Pioneer Press

“The transformational Shah returns with subtlety in the title role as once again, a figure suspended between a corporeal dimension and ethereal dimension.”
~Lavender Magazine

“Lipica Shah’s reemergence here as Shiv stunned with her quiet sincerity, her thoughtful poise, and her waves of nostalgia.”
~Minnesota Playlist

“And of course, there’s Lipica Shah as Shivrati, working wonders with a very difficult role.  Her work could have been diffuse and vague, but Shah stays focused and intoxicating, well-connected to Shiv’s yearning.  The sun-drying of the bed linen thrills.  The love she feels for her Bapu is powerfully rendered.  And, as the name Shiv suggests, she generates knife-like power.”
~How Was The Show? Blog

“…film star Shambervi [is] charmingly enacted by Lipica Shah… Shah exudes entitlement as Shambervi, giving a particularly strong rendition of “Shambervi’s Lament,” a bitter song about blind ambition and the price of fame.”
~The Associated Press

“Shah is everything you could want from a Hindi film heroine: Imagine if Aishwarya Rai (Bollywood’s own Angelina Jolie) could belt, or you know, actually sing any of her own songs.”
~TheaterMania

“Lipica Shah, as the up and coming starlet, has a voice and looks that could fill a far larger theatre”
~Exeunt Magazine

“Ms. Shah and Mr. Choksi provide the most appealing number, in which their characters happily act out a scene in Hindi from a movie they saw as children.”
~The New York Times

“The adorable tag team of Lipica Shah and Nick Choksi lend sex appeal as a divalicious actress and an adorable blast from her past.”
~NY Daily News

“But it is Choksi and Shah who really shine, especially in their solo moments.”
~NYtheatre.com

“A standout: Lipica Shah as an ABCD — American Born Confused Desi (or Indian). Ms. Shah’s character has it right when she says that “c” should stand for confident.”
~The New York Times


“Shah has an elegant voice…girly and sweet.”
~Review Fix


Let’s Be Out, The Sun is Shining:

“Lipica Shah was amazing in the film, bringing a sense of innocence and strength to her role as Diya.”
~Phil’s Film Adventures Blog

“As Sameh, Lipica Shah is an enticing narrator. She also emerges as the most human person”
~The Pittsfield Gazette


“—his sister, Sameh (Lipica Shah, whose passion is cooler but no less intense)…is the play’s narrator and a kind of ghostly presence for much of the piece…it’s the women who move the play.”
~The Valley Advocate 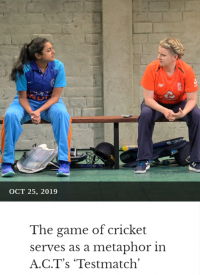 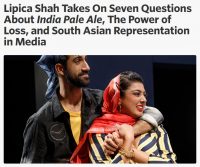 Interview with Theater in the Now about Coping 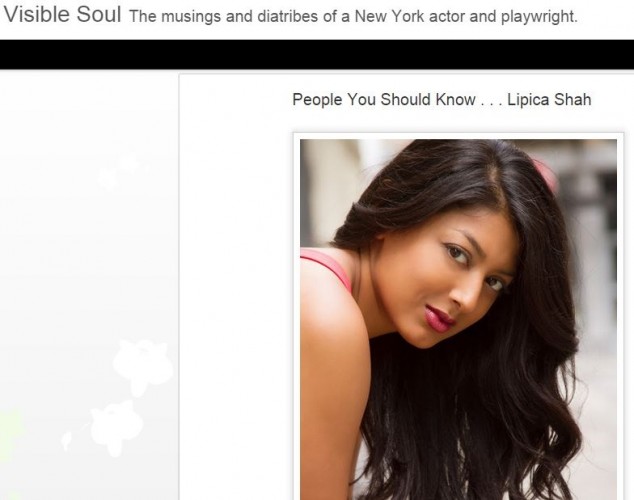 Interview with Visible Soul about Coping

Interview with Voice of America about I Like To Be Here 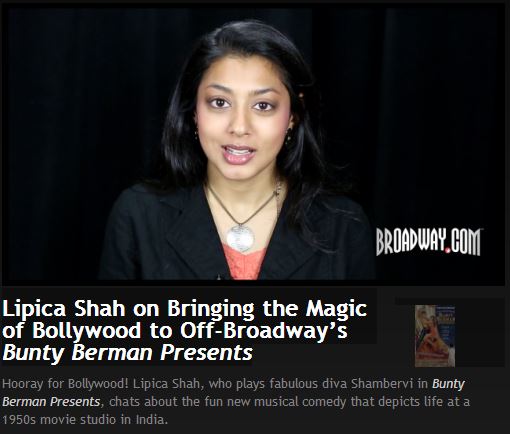 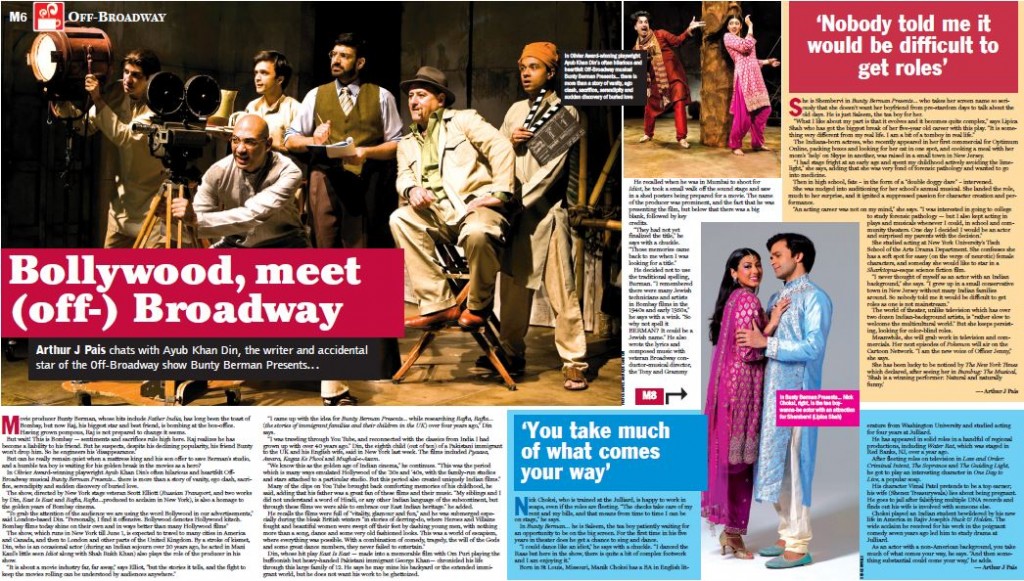 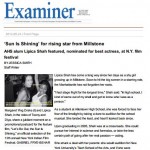 Feature article in the Examiner newspaper about Let’s Be Out, The Sun Is Shining