Cricket and Colonialism in Another World Premiere!

I’ve just completed my third month in the Bay Area – and also my third week of rehearsals for the world premiere of Testmatch at American Conservatory Theater (A.C.T.)! More info on the play and how to get your tickets is below.

I feel quite lucky to have gotten the chance to work on two world premiere plays back-to-back this year (House of Joy this summer at Cal Shakes and now Testmatch). It’s only further solidified my passion for script development – I thrive on the demands new plays place on the cast and creative team in rehearsals. It requires total collaboration, a willingness to be open to new perspectives and ideas, respect for research and dramaturgy, the ability to be flexible and play…not to mention the adrenaline rush that comes with constant script changes (from tiny cuts to substantial re-writes).

This rehearsal process has NOT disappointed! I’ll tell you a secret: we currently don’t know how the play will end. Kate (our brilliant playwright) has given us a lot of possibilities, and we’ve been exploring them with Pam (our insightful director) one by one to figure out what works best, what feels right. It’s really exciting to be a part of this exploration, and it’s really meaningful that what we’re exploring is how to de-colonize the narrative. Testmatch asks hard questions about colonialism, gender, and power through two contrasting, time-traveling stories focusing on cricket, a game of strict laws and hidden violence. Because how can we understand the present if we won’t acknowledge the past? History is generally told by the victors. We now have an opportunity to give voice to a history – a story – that was erased.

If you’re in or near San Francisco, I hope you’ll join us at A.C.T. Let me know if you can! 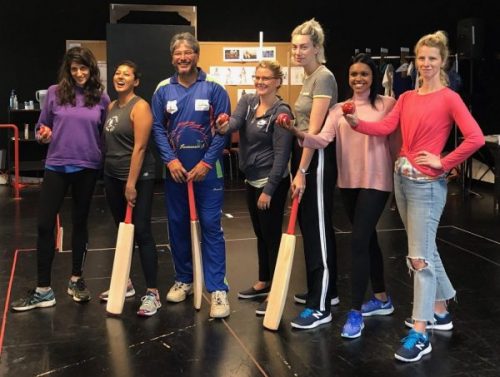 Game faces with coach Raj Padhi of the Bay Area Cricket Alliance after he walked us through some cricket basics!

“It’s 2019 and tensions in the locker room rise during a world-class match between rival women’s cricket players from India and England, as secrets spill about relationships, influencers, and the integrity of the sport. Then in 1800 (or so), Abhi, the Number One Sepoy of the East India Co., struggles to force two bungling, cheating British administrators—absorbed in setting down the rules of cricket—to focus on the famine they have created outside the compound walls.”

In part 1 I portray India 2, who, despite being one of the best batsmen on India’s national women’s cricket team, is keeping a secret from her teammates. In part 2 I portray Abhi, the aforementioned sepoy (soldier) who is trying his best to effect whatever change he can while seemingly maintaining the status quo.

I’ve found that both characters are natural observers, seeing not just what’s in front of them but also what’s in the periphery; they collect and deploy information at opportune moments to try to force others to focus on the truth. This means that they are both often silent, as if hiding in plain view, which means I’m really exercising my “active listening” muscles!

It’s been quite a fun challenge to find and develop other similarities between these two characters on top of learning how to play cricket. Let me just say…it’s a VERY complicated sport! Cricket was developed by the British as a “civilized” game, and they brought it to their colonies as their empire grew. It became one of the few places where the colonized could meet their oppressors on an even playing field.

We were lucky to get to work with Raj Padhi, a coach and founder of the Bay Area Cricket Alliance, who gave us a primer and walked us through some VERY basic techniques. Turns out, cricket demands not just physical skill, but also mental stamina and patience, a firm grasp of physics and geometry, and acute powers of observation and strategy. Raj’s passion for the sport was infectious, and he may have made fans of all of us! 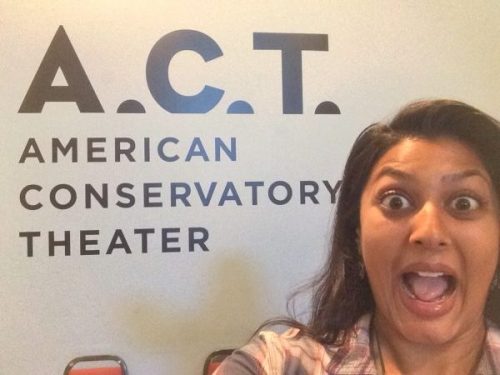 Excited face selfie from our first day of rehearsals!

Testmatch will be in previews October 24-November 5
and then runs through December 8, 2019
(Tuesdays-Sundays)
All performances are at A.C.T.’s Strand Theater, 1127 Market Street in San Francisco.

A.C.T. will also host a number of InterACT (see what they did there?) pre- and post-show events throughout the run, many of which involve discounted tickets to the show. I’m particularly excited for “Drinks & Drama Friday,” “Pride Night,” and “Wine Night,” but there are tons of different events to choose from, so click HERE for a full list!

There’s no guarantee we’ll receive any comp tickets during the run. But just in case we DO, make sure to LIKE my Facebook Page because that’s where I’ll be posting any comp offers, additional promo codes, and other deals. See you at the Strand!