What was it like to be on the set of “White Collar?!”

I love the camera. I love being on stage, too, but there is nothing quite like being in front of a lens to make my spine tingle with excitement. I long for that day in the future, when I can experience that sensation every single day.

Enough of the mushy stuff. TONIGHT! (That would be Tuesday, June 21st, 2011) at 9pm (EST) I take one step closer to my dream in a co-star role on the hit USA Network drama, White Collar!

Oh, I remember the audition – I initially went in for a character with one line  and was in the room with Casting, the Director of the episode, and one of the Executive Producers. I always find myself more nervous when auditioning for these smaller roles – maybe I put extra pressure on myself to create a complete character with so little script to work with? Who knows! But I had a TON of fun in the room, and a few days later my fabulous agent called with the good news: White Collar episode 303 = booked!

I’d like to turn back time just a bit and take you through what it was like to be on the White Collar set. *cue time travel music*

520am: Just before my call time. I arrive at the campers like the call sheet instructed and immediately run into a slight problem…uhm…which one of these many campers am I supposed to go to?? OOF, I’m glad I arrived early! I wander up and down the block a bit until I notice a sign of life – a PA (Production Assistant) wearing a walkie exiting one of the campers. “Hi! I’m Lipica…uhm…I’m an actor, and I’m playing the role of Melinda today…” He graciously ignores my awkward 5am stammering, gathers the paperwork I must fill out, and escorts me to *ahem* my trailer. 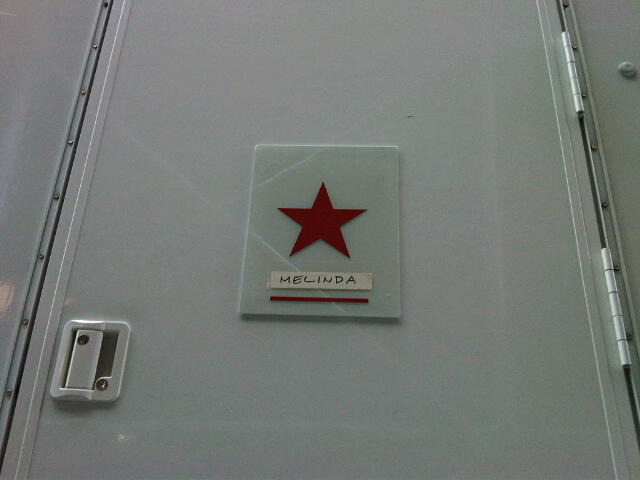 545am: I shake off the last of The Sleepiness and start making my way through the packet of paperwork. It’s the usual stuff – contract, actor release, NDA (a confidentiality agreement – hence, why y’all have had to wait so long to hear these juicy details!), payroll forms – but everything had to be completed in triplicate. The monotony of the paperwork is starting to revive ol’ Sleepy! Thankfully, I am saved by a knock at the door…

630am: Another PA brings me to the hair and makeup camper. The hair and makeup team is lovely – and they’re surprisingly awake and raring to go! In no time at all, the stylist has whipped my unruly mane into shape (so, dear hair of mine, you’ll behave for others, is that the game?) and I move over to the makeup chair. As we chitchat, my face is transformed from semi-tired and plain to fresh-faced and fierce. Seriously, I’m like “Is that me?!” And then two of the show’s series regulars walk in and another round of introductions occurs. I admit to being starstruck at first, but I was honestly surprised at how quickly I got over that speed bump! They are the nicest guys and put me right at ease. I am thrilled to get to do a scene with these two today – what a treat it will be to work with and learn from them!

730am: I’m back in my trusty trailer (and admiring myself in the mirror haha) when there’s another knock at the door – hello, Wardrobe Assistant! This is a moment I’ve been eagerly awaiting. Yesterday, I journeyed over yonder East River to Long Island City, Queens for my wardrobe fitting, so now is the moment when I find out how Wardrobe and the Director have decided to dress me – Slacks? Jeans? Skirt? Blouse? Jacket? Super high heels? As it turns out…super high heels? Yup. Also some very comfy wide-bottomed jeans, a beautiful blouse, and fitted cardigan. Plus a kick-ass belt that makes me feel (and look) WAY more fashionable than I am in real life. Throw in some jewelry – bracelet, earrings – and I’m all dressed up…with nowhere to go quite yet. Production is still filming the scene before mine, a walk-and-talk between two of the main characters that takes place outside, so they want to get it out of the way before the streets get too busy.

830am: I’m called to set! Another PA escorts me to the correct floor and brings me onto the set, an office space converted into the headquarters of a powerful (fictional) magazine. I meet my director for the first time, as well as the four other actors in the scene (two of whom I am meeting for the second time today). They are television veterans, and let me tell you – it took all of me to stay calm, cool, and collected. We read through the scene a few times to get a feel for pacing and character, then we’re up on our feet blocking it out. We walk through the scene a few times for the crew to get a feel for what they’ll be shooting. Once blocking is set, they call in the second team – “Does that make me part of first team?” I wonder. The answer is yes. We get a break, while our stand-ins…well…stand in for us so the crew can fine-tune the camera moves, lighting, and sound set ups.

915am: The five of us head to a holding area adjacent to set, and I have the opportunity to talk with the other actors about their careers, their history, and some fun stuff – one of the stars says he asks every co-star to name their favorite place to eat in New York City. As a self-proclaimed foodie, this was a tough one! We share our favorite restaurants and move on to talking about – what else? – movies currently in theaters. I just saw Rango and highly recommend it, as it is not just an animated film for kids (it really is great!) Part of me is surprised to find them all to be so…normal. I mean, I don’t know what I expected, but it is so refreshing and inspiring to see how gracious and open and down-to-earth everyone is. It really drives home the point that, in order to work in this business, one must be pleasant to work with; talent is fine and dandy (and necessary), but consideration and respect are much more important when it comes to creating and maintaining a positive work environment.

1030am: First team is called back in – we’re all miked with wireless lav microphones, and it’s time to shoot! The scene has been broken down into four parts: the Agents walking with the magazine Editor into the cubicle area, the interior of the Journalist’s office (including close ups on each actor in there), a reverse of the office (to see where I’m sitting; I portrayed the Journalist’s Assistant), and the Agents leaving the office and meeting the Assistant (me!) in the hallway. There are also two gigantic camera teams, capturing each shot from different angles. So much going on!! I am exceedingly thankful that I’ve had practice in this kind of situation before – not on a professional set, but in school. When I studied screen acting at Stonestreet Studios, huge emphasis was placed on knowing and understanding on-set vocabulary and movement – one of my classes was specifically geared towards a multi-camera setup. As we walk through the scene again, with both camera setups, I recall those lessons from Stonestreet: how to position myself so I am open to both cameras at once (potentially increasing my screen time), how to pace my walking so the camera can easily follow, where to look when the camera is on me so I maintain continuity and sight-lines, etc. Afterwards, the director compliments me on my professionalism, and one of the camera operators comments that my actions helped smooth the process! (I’m aware I’m tooting my own horn right now…just let me have this one, por favor?)

The hardest part for me by far is finding a natural rhythm for my character – in the first 3/4 of the scene, all of my actions and interactions are nonverbal. Initially, I struggle to find the balance between grounded response and overt reaction. It is a very fine line, and the Director is tremendously helpful in finding the correct amount of both. By the time the camera is on me, I am able to deliver nuanced performances, slightly different each time, and I’m really proud of my work. The other actors and I joke about the expression on my face – “If looks could kill!” I won’t spoil the scene’s events, but I am very interested in seeing what the final, edited cut looks like! I guess I’ll find out tonight 🙂

Throughout the many takes – and shot setups and last-minute changes – I try my best to remain a positive, energetic, and respectful presence. I make it a point to learn as many crew members’ names as I can – and to refer to them by name, when possible – because I truly do respect and appreciate what each of them brings to the set. Each of them is integral to the minute-by-minute operations of the set, and they all help make the shoot day run like a well-oiled machine. I despise this idea that “talent” and “crew” are separate entities – we work together in the same environment, towards the same goal, do we not? I have so much fun joking around with the crew in between takes, and hearing some of their stories. We are all a little sad when the scene is wrapped!

1245pm: I’m wrapped! It’s a bittersweet moment; I’m exhausted and ready to go home, but I’m having so much fun with everyone on set. I thank each crew member I see on my way out – my first co-star experience would not have been the same without them! As I walk with the other actors back to the campers, a random New Yorker recognizes one of the show’s stars and shouts out how much he enjoys the show. I can’t help but think to myself…someday, it’s going to be me.