Oh hello there! It is I, your humble thespian, returning from a (rather long) writing hiatus – 2011 has kept me very busy thus far! However, as I am currently in the midst of said wonderful chaos, I must restrict this posting to a few very exciting tidbits. Cross my heart, I pledge to pen something with a bit more juice very soon!

And that brings us to June – what a month it’s shaping up to be.

I am honored to work with Rising Circle Theater Collective in their Summer PlayRise Festival.

PlayRise is a week of staged readings, the culmination of a writing intensive for five up-and-coming playwrights. I will be reading (and singing!) the role of Birdie in Deepa Purohit’s new work, Flight, to be directed by Kareem Fahmy. I have been working with Deepa for a few weeks to find Birdie’s story and soul, and I cannot wait to give her a voice.

The title of this post promises some television news, right? WELL! Get your DVR/TiVo/old school VHS recorder ready: at 9pm on Tuesday, June 21st, on USA Network, I will be appearing on the hit show White Collar!

I have a co-star role (aka I have one scene, but I ain’t counting! It was incredibly fun to shoot, I learned SO much, and I am so grateful for the opportunity) as Melinda, the assistant who…well let’s not spoil it, shall we? You’ll have to watch and see what happens 🙂

And finally…the musical. If I’m being honest, most of my nerves stem from this component of my June. The last time I sang in public – on a stage, not in my shower, which technically doesn’t count as “in public” anyway – I was in high school. A lifetime ago! And up till now, I think I thought that the singer inside me had just disappeared. I’ve come to realize that she’s just been in hibernation, lying in wait for…well perhaps for the right moment. And here it is: 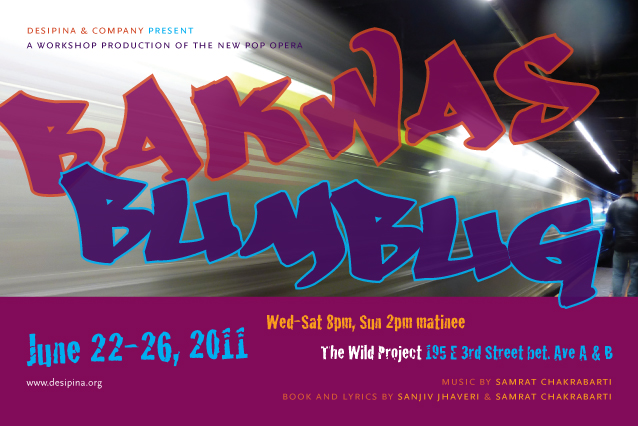 Bakwas Bumbug, a new pop opera written and directed by Samrat Chakrabarti and Sanjiv Jhaveri, produced by Desipina & Company. It’s a reinvention of Charles Dickens’ A Christmas Carol, told through the looking glass of New York City immigrants and hyphenated America. I will be portraying Sunita, a “bright-eyed, young Indian-American girl” – emphasis on the “American” – trying to balance her roots and her desires. If you’re going to be in the NYC area, please consider coming to see the show! Here are the details:

I bid you adieu (there, we’ve reached the end of my French) with a reminder to check back here and on my Facebook Page for new pictures, videos, and career goings-on.  Till next time!