Today, I registered for the Minnesota Monster Dash, a 10-mile race. It will be my first time running a double digit distance, and given my recently resumed running regimen, I think it will be the perfect way to end my time here in the Twin Cities! It’s in two weeks. I think I might be insane. 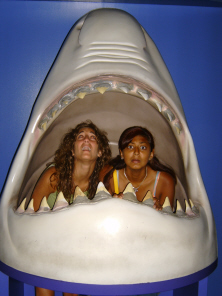 I haven’t run a race since high school. When I also thought dying my hair red was a good idea. ACK!

I have been living in Minneapolis, Minnesota since early September, working on the world premiere of Aditi Brennan Kapil‘s trilogy Displaced Hindu Gods, currently playing in repertory at Mixed Blood Theatre. I play the title characters in two of the shows, The Chronicles of Kalki and Shiv. 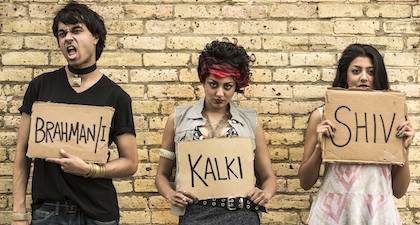 This must be how Lindsay Lohan felt when she did “The Parent Trap.”**

When I found out about the double casting, I felt both ecstatic and nauseated: What a great challenge! Oh gawd this is going to be hard… Thus, a lot of my prep before coming out here involved laying the theoretical groundwork for compartmentalizing the two shows. I thought if I could just keep the worlds separate in my mind, it’d be smooth sailing. “They’re polar opposites; it’ll be easy to differentiate! The hard part will be memorizing everything.” 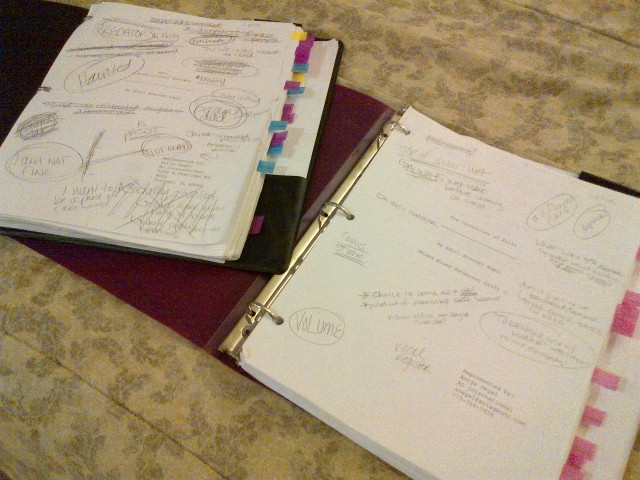 But I mean…that’s what color-coded post-it tabs are for, right?

If ever there was evidence of a momentary lapse in sanity… Clearly, I’d never done this before; I was SO wrong on both counts. True, Kalki and Shiv are incredibly different personas, but it was impossible to keep them entirely apart. Little pieces of each kept creeping up at the most awkward moments. 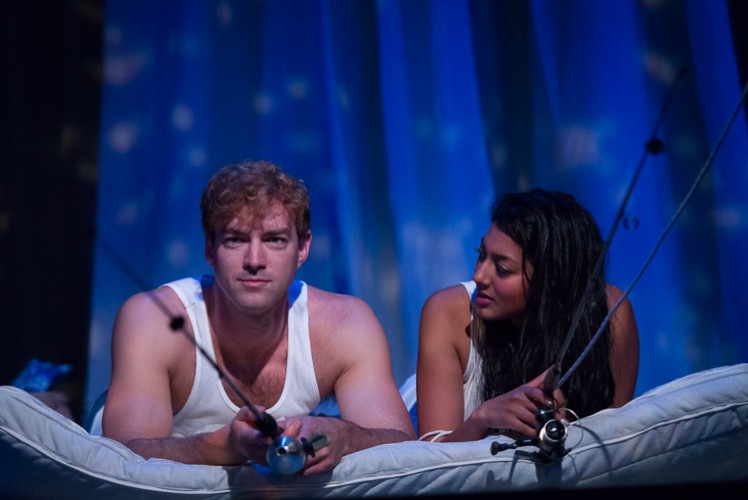 Memorizing all the lines was easy; I quickly learned that the true challenge of playing two characters simultaneously is figuring out how to move between them. I’ve been calling it The Switch (original, I know). 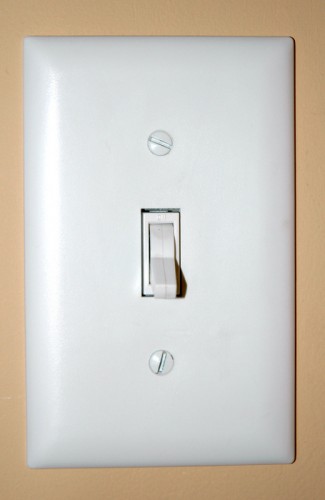 No, not that switch…

Finding that certain gesture, look, feeling, article of clothing, whatever to trigger The Switch was, in practice, not so simple. I had all kinds of ideas about what would work, but the first time I tried it – at our dress rehearsal – was a nightmare. I managed to physically change out of Kalki and into Shiv, but I wasn’t mentally or emotionally present as Shiv until more than a quarter of the way through the play! (I remember because it coincided with the moment I started breathing again. Heh.) My failed Switch was compounded by the fact that when we perform the three shows back to back on weekends, the transformation from Kalki to Shiv must occur within about 15 minutes.

I know what you’re thinking – 15 minutes can be an eternity. You can make a meal in 15 minutes! Play a quarter of a football game! Take a cat nap! 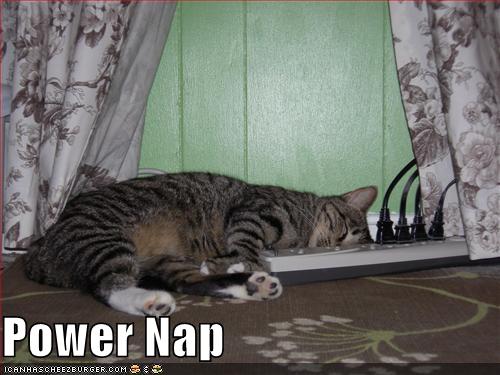 But when it takes roughly 75 minutes to put ON all the Kalki accoutrements – the layers of clothes, the lace-up boots, the crazy makeup, the makeup sealant, 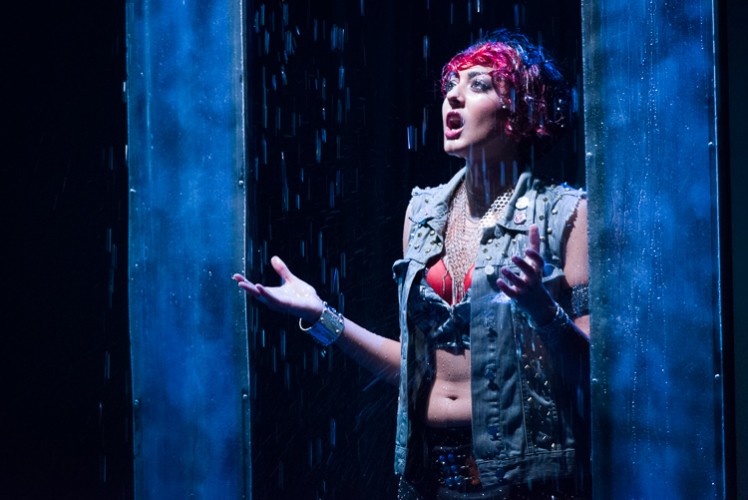 THIS is why the makeup sealant – in all its alcohol-based, tear-inducing glory – is important.**

the jewelry and piercings, the wig (the wig!) – trying to take them all off and put on Shiv’s comparable simplicity is maddening. 15 minutes go faster than electronics on Black Friday. Before the dress rehearsal, I thought I had The Switch all figured out: just get through it as fast as possible – it’s a race, and I WILL WIN! – but the characters’ differences worked against me.

Wardrobes aside, Kalki has outrageous physicality, and a larger than life, what-you-see-is-what-you-get personality, whereas Shiv is a mystery, quiet and emotionally complex. So much of “putting on” Kalki is in the clothing, makeup, and hair, and when I’m done she walks with this swagger – leading from the hips – that’s easy to slip into. In a weird way, she lives in my comfort zone. 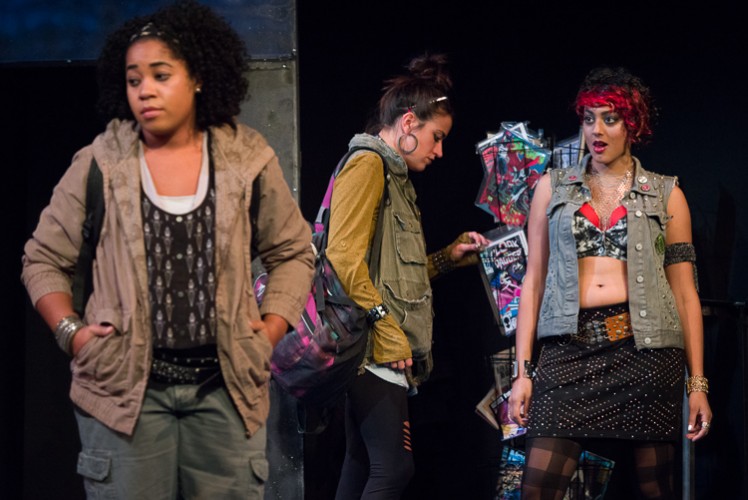 Because I LOVE playing the bad influence.**

I’m used to playing teenagers, especially teenagers with attitude, and her literal godliness is so powerful that no matter what she does as an instigator, it’s fine. It’s really quite freeing (and frightening), to feel like one can do no wrong, that there are no mistakes. 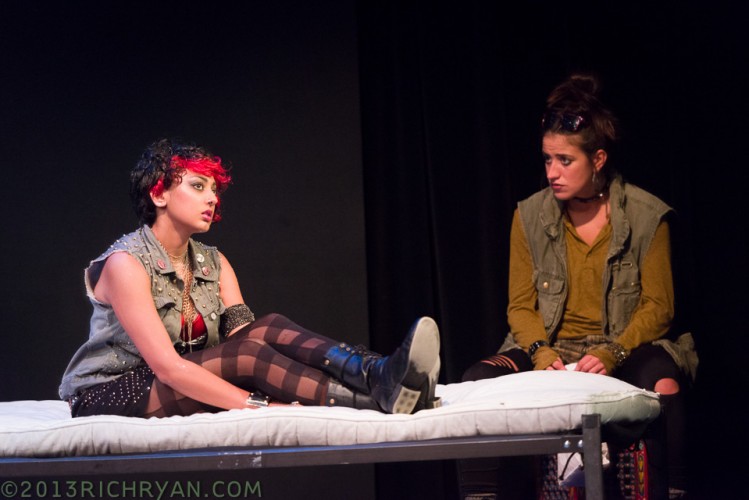 “The worst is when I’m human…I don’t like being human. Why do there have to be so many mistakes?”**

Shiv doesn’t feel like that – she’s constantly on guard, choosing her words deliberately and calculating her next move. 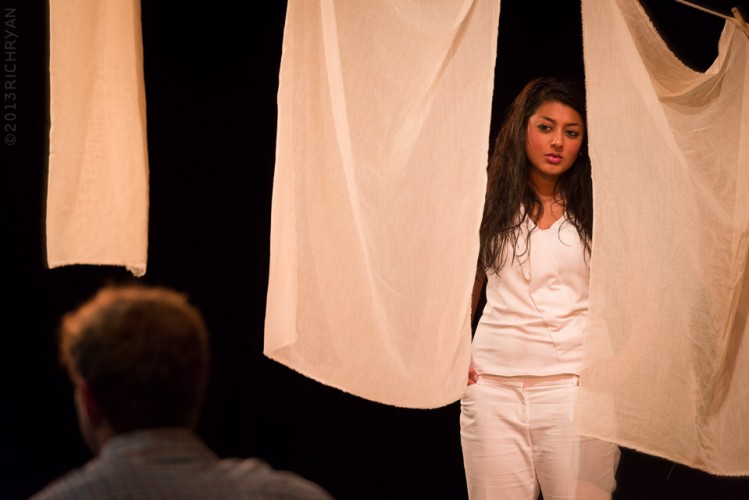 “…it creates a kind of curtain to the world.”**

She’s always been an observer, surviving by trying to fit in, keeping her thoughts and emotions to herself, and escaping to her imagination when things get tough. Her world is thrown off balance when she meets Gerard and has to confront, for the first time in a long time, something real rather than fantasized. Surprisingly, Shiv turned out to be pretty similar to me, which was…new. I don’t usually share much in common with the characters I play (Self preservation? Denial?), and it’s a little scary to feel so exposed now. 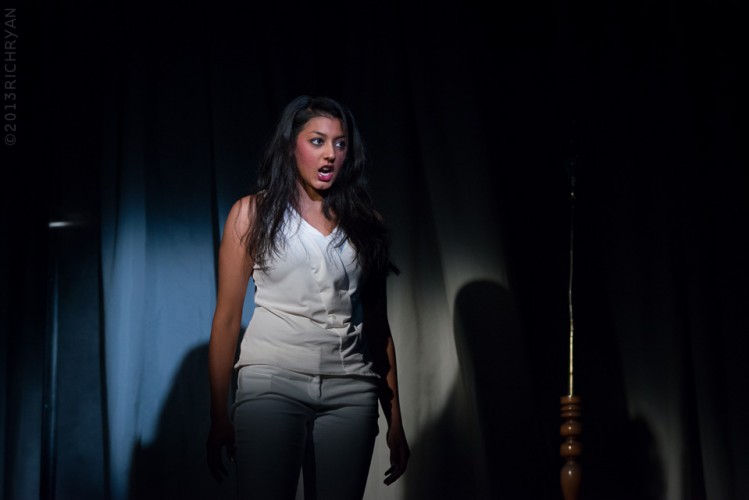 But that’s why we do it, right? That’s part of the thrill of acting. For me, tapping into my childhood to become Shiv is completely reliant on finding stillness and rhythmic breathing; it’s how she – we – maintains control.

During rehearsals, I’d work on Kalki in the mornings and Shiv after lunch. At first, that hour break in between wasn’t enough to shed one and assume the other. There were so many voices and needs and ideas battling for control – my brain felt schizophrenic. 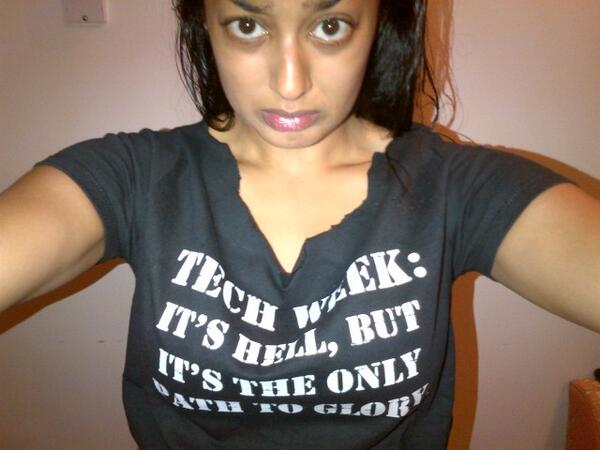 In an effort to quell my growing anxiety, we made a sort of pact: if I promised to spend just 5 minutes of lunch hour outside, rain or shine, doing nothing, then my brain would shut up. 5 minutes. No memorizing lines, no going over directors’ notes, no phone calls…just nothing. It sounds dumb, but it worked! Clarity. Focus.

So after that first failed attempt at The Switch, I wondered…could I apply the same pact to these 15-minute changeovers? Maybe I’ve been approaching this all wrong! What would happen if – as I stripped off my wet Kalki costume pieces and piercings, removed all the bobby pins holding the wig in place, scrubbed off the sealant-coated makeup, reapplied blush/eyeliner/lip gloss, dried my wet mane, and donned my dry Shiv clothes – I pretended like there was no rush? Could I calm my panicked brain by behaving like I had all the time in the world? And would that translate into assuming Shiv’s serious stillness? 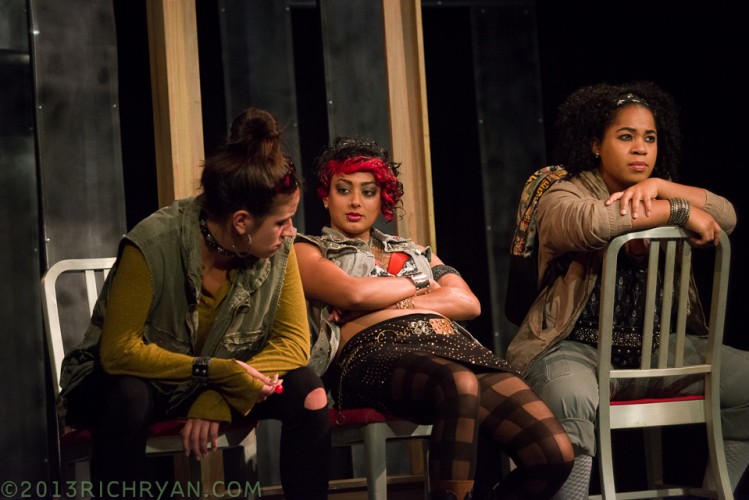 Opening night was the big test. The Shift took a bit longer than the time allotted, but luckily the audience was still transitioning, too (thanks to lines for the restrooms and bar). I don’t remember waiting backstage for my cue light to flick off, but as soon as I stepped through the curtain and took my place, Shiv was there. Woohoo! Lying to myself worked! 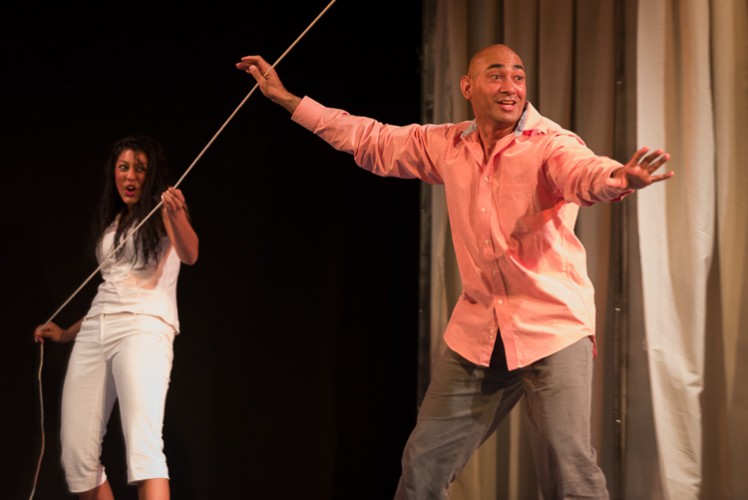 And it felt AWESOME.**

This trilogy process – analyzing and decoding two scripts, crafting two characters simultaneously, accepting the roller coaster inconsistencies inherent with repertory performances – has been one of the most challenging things I’ve done so far in my career. 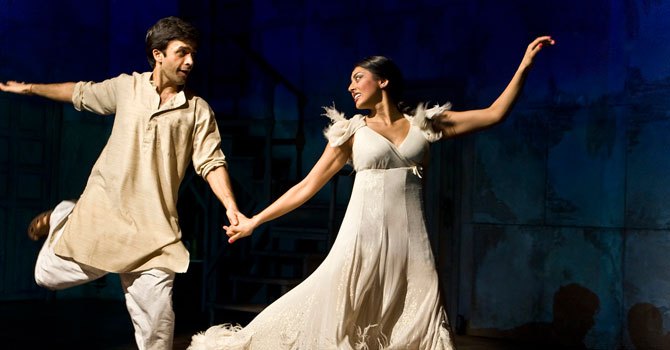 More than learning how to dance in a floor-length Ginger Rogers dress, backwards, and in high heels (here’s looking at you “Bunty Berman Presents…”)!

But I wouldn’t change anything about it. (Except maybe time. It would have been AWESOME to have like one more week of rehearsals. No, I take that back. No I don’t. Yes I do.)

I’m so grateful for this opportunity – not only have I learned a tremendous amount about myself, but it is seriously an honor to share this stage with my beautiful castmates. 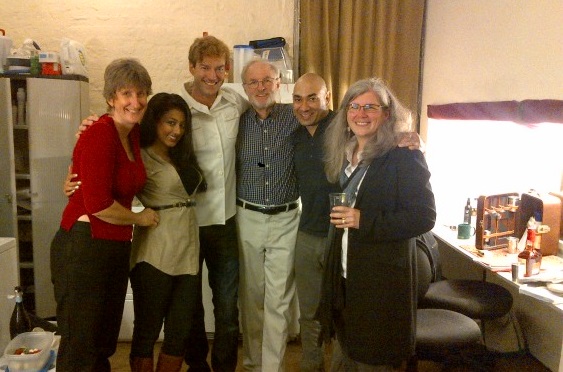 I mean, look at them! 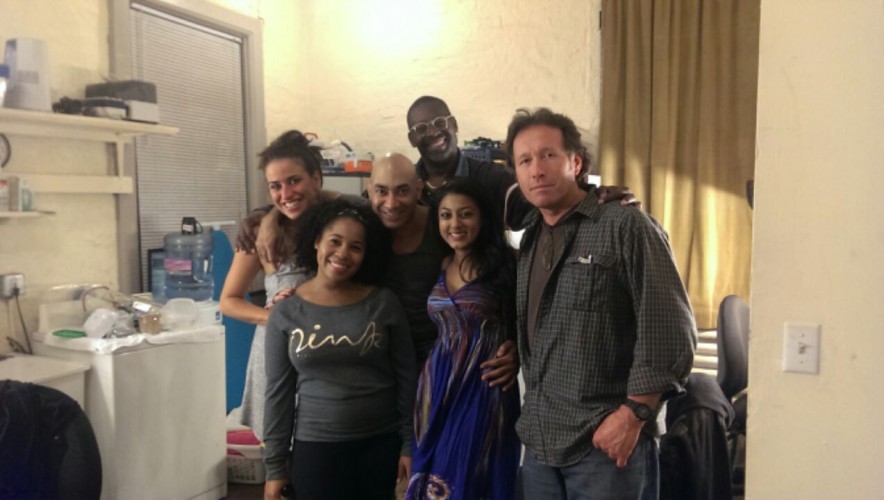 And this experience has given me new-found courage: with the right support system (here’s looking at you Aditi, Risa, Bruce, Andrew, Cat, Joetta, Peter, Nat, Debargo, Mixed Blood, and the rest of our designers, staff, and crew!) anything is possible. Even if it seems insane at the time.