The Audition Room: feel the fear…and do it anyway

Let us discuss for a moment a place that many of my Actorfriends (yep, one word!) dub both “thrilling” and “terrifying.” It’s a place I myself used to shrink and hide from, yet also looked forward to visiting with anticipation. I speak, of course, of that mysterious creature: the audition room. 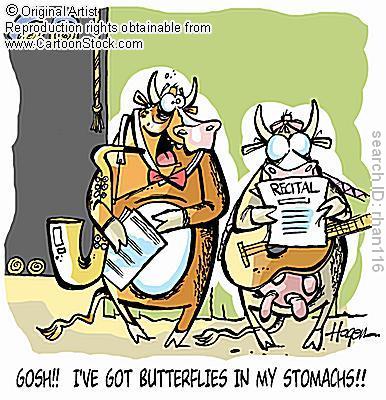 Audition rooms, like crayons, come in all shapes and sizes and colors. Except…you know what you’re going to find when you open a box of Crayolas; every audition room is a surprise.

Who will be behind that closed door: the Casting Director, Casting Associate, Casting Assistant, Casting Coordinator? Or will it be the Director, Producer, Writer, Theater/Film Manager? Are they tired from seeing the same thing over and over again, or will my interpretation be fresh and new? Have they already found the perfect actor for the role – am I wasting their time? Is there a chair? Should I sit or stand? Do I shake their hands? And so on and so on and so on…

In school, my teachers devoted a significant amount of time to the audition process itself, trying to prepare us for exactly what we would find on the other side of the door. The problem is, as wonderful as my teachers were (are!), they were wrong. There is simply no way to know what you’ll find in an audition room. It is why they have remained such an enigma among actors, why so many actors FEAR them, and why conquering that fear is one of the keys to our many successes.

Over the past few months – nay, years – I have noticed a significant decrease in the amount of butterflies invading my stomach before stepping into an audition room (I mean, it’s hard to quantify…but trust me, they’ve definitely disappeared or moved on to some other poor soul). I’m much less focused on someone discovering my sweat-soaked hand when they move to shake mine; sweaty palms are a thing of my past now. And – I finally feel like I can say this – these days I can’t WAIT to step inside the audition room.

This isn’t to say I am without fear. I fear many things – driving in the city, accidentally dropping my Blackberry in the toilet, tripping on the sidewalk and cracking my front teeth during the fall, being attacked by a kamikaze pigeon, just to name a few – but the audition room isn’t one of them. Anymore.

I finally feel like it is MY space. Mine. I can make it whatever I want it to be, become whoever I want to be inside its walls. Sure, I still don’t know exactly what to expect when I step over the threshold, but it doesn’t matter anymore. I know that for 30 seconds-2 minutes-10 minutes…it’s my playground. Just me and the words in my own world – that’s not scary at all. Oh, and *insert drum roll here* I think it’s working.

Last Monday I went to an EPA at the Actor’s Equity building for the Contemporary American Theatre Festival, to be held this summer in Shepherdstown, West Virginia. By the time I arrived, the appointment list was full, so I joined the alternate list, waited, and hoped I’d be seen. For three hours, I read and re-read the cold sides affixed to the wall by the monitor, becoming familiar with the words and slipping into and out of the 14-year-old character’s body. Half an hour before the EPA was to end, I’d almost given up. But then someone didn’t show up for their appointment time…and the four alternates in front of me were nowhere to be seen. I was in!

After waiting so long, anxiety building, I thought for sure those butterflies would sabotage my audition. Surprise: along with those actors, they didn’t show. I turned the small audition space into the flower shop I needed it to be, let the young character fill my shoes, and played.

The next day I got a callback.

And at the callback, they gave me a second callback.

That was this past Friday. I haven’t heard anything since then, and I don’t know if I will. But honestly? I’m okay with that. I’m really proud of myself and of what I did in that audition room. For those 5 minutes, I was someone else – albeit, imbued with my trademark sass! – and I was in a safe space.

And it felt damn good.